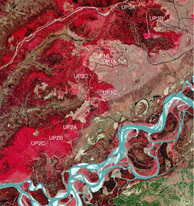 We have employed various high-throughput sequencing strategies to characterize the structure of fungal communities in soil in Interior Alaska (Taylor et al 2007, 2008). This work has been carried out with NSF support in cooperation with the Bonanza Creek Boreal Forest Long-Term Ecological Research (BNZ LTER) program. Our goal has been to understand how fungal community composition differs among soil horizons, among forest stand types, across seasons and along successional gradients. We have found that soil horizon is the strongest driver of community composition, but that communities are also strongly correlated with plant communities (both understory and overstory), soil pH, soil moisture and successional stage (Taylor et al 2010; Taylor et al 2014). Communities also shift with season but return to a similar composition in successive summers (Taylor et al 2010). Root-associated fungi (ectomycorrhizal, ericoid, dark-septate endophytes) dominate the soil communities in all seasons, including winter, surprisingly. 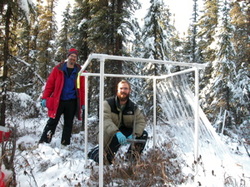 >  Structure of soil fungal communities in the Arctic

In collaboration with Donald (Skip) Walker and the biocomplexity project, and with NSF support, we have examined diversity and community composition of ectomycorrhizal fungi on roots of Salix arctica and Dryas integrifolia (Timling et al 2012) and in total communities in soil from across the Arctic. We have sampled along the North American Arctic Transect (NAAT), along the Eurasian Arctic Transect (EAT), on Svalbard and in Greenland. To our surprise, fungal species richness does not appear to decline with latitude, at least at the plot/site scale. Richness of both ectomycorrhizal and total fungal communities was exceptionally high, given the low and decreasing diversity of plants as latitude increases. We found that the dominant fungal taxa have very wide distributions, both across the Arctic and beyond the Arctic. Despite this evidence for very long distance dispersal (Geml et al 2011), we also found very strong structuring of fungal communities along the latitudinal gradient of the NAAT. Neighboring islands and subzones had the most similar fungal communities. Fungal composition was correlated with climate, latitude, soil chemistry and plant community composition.
>  Structure of soil fungal communities in New Mexico (Sev LTER)

Work in this area has not yet begun. The Sevilleta LTER site in central New Mexico spans a unique gradient of aridland biomes, including riparian bosque forest, desert shrubland, arid grasslands, piñon-juniper scrub, dry pine forests and mountain mixed conifer forests. Cold regions and arid regions share the fact that water deficits exert the greatest stress on microbes, including fungi. We aim to investigate parallels in community structure, function and adaptation between the BNZ and SEV LTER sites.