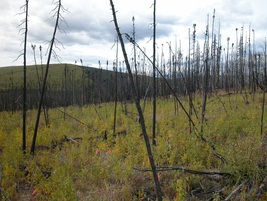 The fire regime in Interior Alaska and other regions of the boreal forest is changing. Even though they are a normal component of these ecosystems, fires are becoming more frequent, hotter and larger. Alaska PhD student Rebecca Hewitt has been working to understand how fire may interact with destruction of mycorrhizal fungi to constrain and/or promote the advance of treeline in the Arctic. She sampled resprouting Betula nana (dwarf birch) after the remarkable Anatuvik River tundra fire (ARF) in northern Alaska, and found that these shrubs support a community of late-stage fungi that likely contribute to ecosystem resilience following fire (Hewitt et al 2014). This 'nurse-plant' phenomenon may be particularly important in light of her finding that post-fire ARF soils contained essentially no ectomycorrhizal inoculum. UNM MS student Rae Devan is working on the effects of fire severity on mycorrhizal colonization and forest successional trajectories in the boreal forest of Interior Alaska. 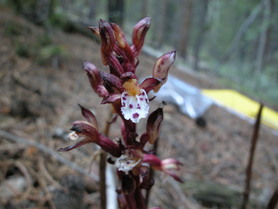 Corallorhiza is a genus of mycoheterotrophic (i.e. non-photosynthetic) terrestrial orchids that meet their requirements for carbon and nutrients by way of their mycorrhizal fungi. For many years, we have studied aspects of the evolution and ecology of these unusual mycorrhizal associations (Taylor and Bruns, 1997; Taylor et al 1999, 2004; Barrett et al 2010). We have found that all members of the genus Corallorhiza are highly specific in their fungal associations, targeting fungal taxa in either the Russulaceae or Thelephoraceae (Taylor et al 2013). Both of these genera are, in turn, ectomycorrhizal with surrounding host trees, which are the ultimate source of carbon for the orchid. Each species of Corallorhiza associates with a different spectrum of fungi. Furthermore, different genetic lineages within Corallorhiza maculata have distinct preferences for different species and clades of Russula (Taylor et al 2004). Hence, mycorrhizal associations are evolving extremely rapidly in these orchids, and these 'host shifts' may even be related to orchid speciation. We are currently using microsatellites (Hopkins & Taylor, 2011) and chloroplast markers to investigate gene flow in relation to mycorrhizal specificity in C. maculata.
•  Hexalectris

Hexalectris is one of the three genera of non-photosynthetic ("fully mycoheterotrophic") orchids that occur in the US and Canada. In early work, we showed that different lineages within the Hexalectris spicata complex all associate with ectomycorrhizal species of Sebacina, but the orchids have diverged with respect to their preferred fungal species (Taylor et al 2003). More recently, Aaron Kennedy has clarified the systematics of the H. spicata complex and analyzed mycorrhizal associations across the entire genus. As with Corallorhiza, each species of Hexalectris associates with a distinct array of ectomycorrhizal fungi (Kennedy et al 2011).

Aaron showed that the H. spicata complex is actually comprised of several distinct species, including the newly named Hexalectris colemanii. This species is extremely rare, and has been proposed for endangered species status by the Center for Biological Diversity. It is also threatened by the proposed Rosemont Mine in SE Arizona. 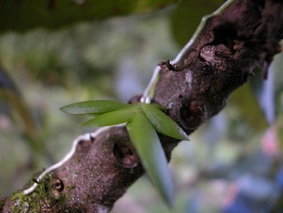 With collaborators Jyotsna Sharma at Texas Tech, Andrew Taylor at the University of Hawaii, and several colleagues at the Lankester Botanical Garden, we are beginning to analyze mycorrhizal specificity and function in epiphytic orchids of Costa Rica. Our core hypotheses are that 1) the distribution of compatible fungi constrains the establishment and subsequent distribution of orchids, and 2) highly diverse, co-occurring epiphytic orchids partition niche-space in part through associations with different arrays of fungi.

>  Grass endophytes along an elevation gradient

This is an NSF-funded project led by Prof. Jennifer Rudgers at UNM. The goal is to understand how climate change may alter interactions between vertically and horizontally transmitted fungal endophytes in grasses along elevation gradients in the Rocky Mountains.
>  Alder-Frankia interactions

Actinorhizal plants form nitrogen-fixing symbioses with bacteria that are housed inside root nodules, much like legumes and rhizobia. However, actinorhizal plants are non-leguminous shrubs such as Alnus, Ceanothus, Dryas, Myrica, Shepherdia and others.  Rather than rhizobial alpha-proteobacteria, the microbial partners are high GC gram+ Actinomycetes in the genus Frankia. Alders (Alnus spp) are often pioneer shrubs and trees that contribute significant amounts of N to ecosystems. In the floodplains of Interior Alaska, Alnus viridis and Alnus tenuifolia contribute a substantial fraction of the N in newly deposited sand/gravel bars that fuels subsequent forest succession. With collaborators Roger Ruess and former PhD student Michael Anderson, we have investigated the structure and function of alder-Frankia communities in Interior Alaska.  In a recently ended NSF-supported project we found that Frankia communities differ strongly between A. viridis and A. tenuifolia, even where they grow sympatrically, and that the communities in A. tenuifolia change sharply and predictably with successional stage (Anderson et al 2009, 2013). Our hypothesis is that these community shifts reflect differences in the form and availability of N and P across succession, and consequent costs and benefits conferred by different Frankia. Measurements of N fixation rate versus respiration among Frankia genotypes support this model (Ruess et al 2013).

We have recently developed a method for characterizing Frankia diversity in soil, not just in nodules, which sets the stage for more direct tests of the degree to which alder selects preferred partners from the available soil community (i.e. engages in "partner choice"). 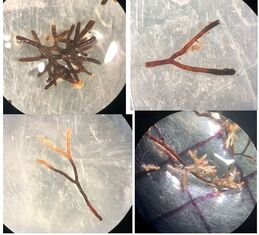 Populations of Pinus edulis are declining with ongoing climate change. Previous studies have demonstrated the importance of P. edulis-associated ectomycorrhizal fungi (EMF) for seedling establishment and resistance to drought. There have been few studies that have examined the persistence of EMF in the absence of a plant host, yet the persistence of these fungi may be paramount to the resilience of P. edulis and other mycorrhizal plant species. Seven sites were selected in northwestern New Mexico with known dates of P. edulis extirpation and a lack of regeneration. Age classes included: two sites extirpated 10-15 years ago, two extirpated 55-65 years ago, two extirpated 500+ years ago, and one extirpated 11,000+ years ago. At each site, two plots were paired: an extirpated plot and the nearest live adult P. edulis stand. Soil samples were collected from each plot at 0-5 cm and 20-25 cm depths from four locations. Pinus edulis seedlings were inoculated with field soils to measure inoculum potential of EMF. It is hypothesized that inoculum potential will decrease exponentially with time since extirpation. Additionally, it is predicted that seedlings with higher colonization by EMF will have significantly greater shoot biomass and higher EMF diversity. Ectomycorrhizal fungal diversity and abundance will likely be significantly greater at the 20-25 cm depth. The shallower depth from 0-5 cm will have a lower abundance and diversity because of erosion, deposition, and exposure to variable temperatures. The results of this study will help guide restoration efforts for P. edulis and other EMF tree species. (Photo credit Annie Montes).