The temporal and spatial scales over which fungi disperse and speciate is critical to understanding their evolution and ecology.  While case studies are accumulating, general patterns in fungal phylogeography are not yet clear. Amanita muscaria, the fly-agaric, is one of the most recognizable and iconic mushrooms of the Northern Hemisphere. While several color forms have long been notes, A. muscaria has been treated as one species. We have carried out phylogeographic multigene coalescent studies of A. muscaria which show that 1) the complex is composed of at least seven biological species, 2) color forms do not coincide with these biological species, 3) most species have continental or sub-continental distributions, although several co-occur in close sympatry in Alaska, and 4) the entire lineage appears to have diversified in Beringia and migrated into Eurasia and North America from there. See Geml et al 2006, 2008, 2009. 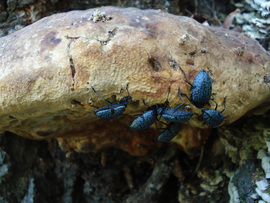 Fomitopsis pinicola is a common and geographically widespread brown rot "conch" or shelf-fungus. As with Amanita muscaria, it is noted for substantial color variation. While it is most often found on dead trees, it is capable of colonizing live trees, both softwoods and hardwoods. It has been thought that forms on different hosts or with different colors (e.g. the tan form recently described as F. ochracea) might represent distinct populations or species. In collaboration with the USDA-FS Forest Products Lab in Madison Wisconsin, Alaska MS student John Haight completed a multilocus phylogeographic analysis of F. pinicola. Rather than one species, there are at least four well-supported biological species. One occurs only in Europe while three occur only in North America. In North America, two species have broadly overlapping distributions in the Northern US, through Canada and into Alaska. The third North American species appears to be restricted to the southwestern US, at least in sampling to date. All four species associate with both conifers and hardwoods and have variable sporocarp coloration.